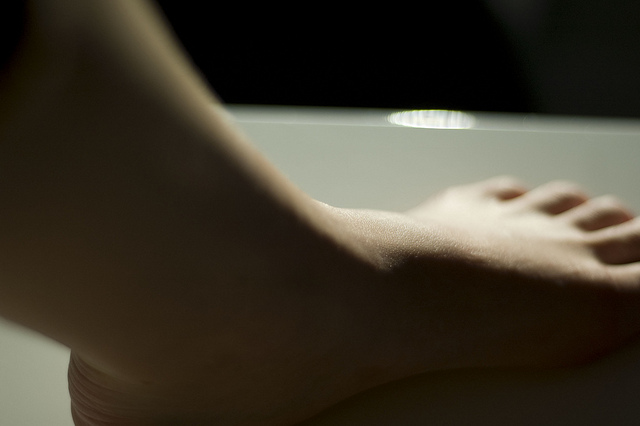 Nearly everyone has turned an ankle at some point in their lives, be it tottering on high  heels, missing the curb after a beer or two or catching a pot hole while out jogging. We hobble around for a few weeks, curse a bit then the memory slips into obscurity – or does it? Surely a sprained ankle could not turn into thoracic outlet syndrome and pain in your arm?

The majority of ankle sprains involve stretching the muscles and ligaments along the outside of the leg and foot. This is commonly known as an inversion sprain. In its innate wisdom our body decide that this is a position that should be avoided at all costs. Sensible you might think in the short term, however when this becomes a habit that is adopted long after the heeling process has taken place we open ourselves up to compensations that can be globally disastrous.

One case in clinic this week proved to be just such a puzzle.  A young lady presented with pins and needles down her left arm and weakness into her hands, that had come on slowly over the previous couple of weeks. On first examination it was a simple case of thoracic outlet syndrome, or was it? After a thorough case history and having ruled out any cardiovascular issues we started to unravel the puzzle and traced back through her case history until we came to an ankle inversion sprain that had occurred several years ago. Unfortunately she was unable to remember which leg, so we decided to map out her feet using an anatomy in motion assessment. Based on the findings we made an educated guess at it being the right leg as it was locked down into pronation protecting it from future trauma.

“Let me check a photo on my phone as I am sure there is a picture of me with a bandage on it” she said.

Bingo! There was the right leg clad in strapping.

We then proceeded to analyse her gait using the ‘flow motion model’ created by Gary Ward and saw that her pronated right foot was preventing her from accessing her left leg cleanly during walking. Gary has ingeniously mapped how every bone of the body should move as we walk and when we are missing one of these phases certain muscles will never get a chance to lengthen and this is what we were seeing here.

In terms of clinical diagnosis the lady was suffering from thoracic outlet syndrome, which is where a bundle of nerves that start at the neck and meander off down the arm are compressed under the collar bone by tight chest and neck muscles. The solution to her pain – reintroduce the foot back to the brain in a safe and controlled environment demonstrating that there was no longer a threat to the ankle, then re-integrate the foot back into the 3 dimensional movement that was missing during walking. This phase of gait also just so happened to stretch both the neck and chest muscles that were causing the nerves to be compressed in the first place. Would stretching the muscles around the chest and neck in isolation have worked as well – most probably yes. Would the results have lasted – I think probably less likely.

By taking the time to understand your history we can treat the cause and not the compensation. Instead of rubbing the painful spot, we can unravel the reason and remove the brakes preventing your body from healing itself. Sure the conventional 30 minute treatment becomes a 2 hour detective session, but the solution creates the home work and the home work makes me redundant. Just the way I like it.