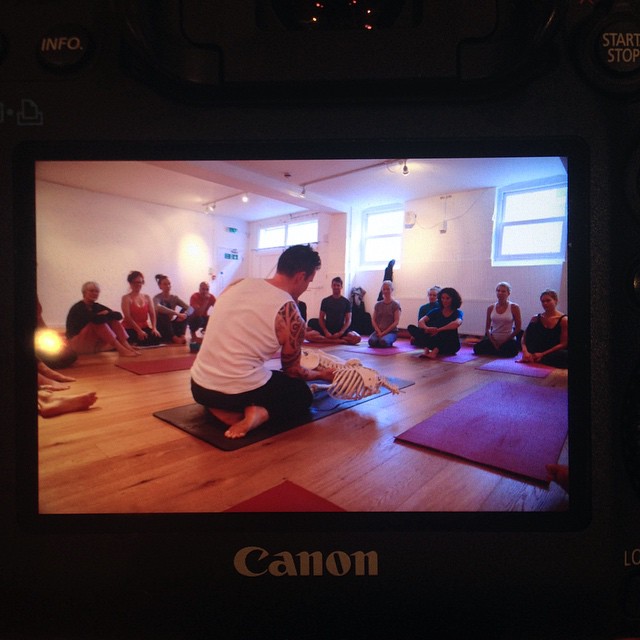 On Saturday myself and Ulric Whyte were honoured to share our love of anatomy and movement with 25 fellow movement omnivores in our Movement Lab ‘hip and pelvis’ workshop (which has now been renamed ‘It’s so hip it’s nearly pelvis’). Everyone stepped into the unknown and challenged their comfort zones, be it moving on the floor, reconnecting with their breath, listening to anatomy or confronting the fear of dancing (without the comfort of a pint or a handbag)! Previously dormant buttocks were persuaded to awaken from their slumber and every one was encouraged to check in with their bodies and to become aware of their habits, tightnesses, movement preferences and dark spaces. The aim of the session was not so much about becoming a fountain of knowledge about everything  hip and pelvis, but rather to be guided on a journey of self awareness — to listen, feel and explore your own body and to become empowered within in your own skin.

Ulric spent some time talking about movement maps. He explained how movement patterns are like well worn paths, which, the more often trod become habits. We are all guilty of falling into a movement slipstream, after all if we consciously had to think about every step we took we would be exhausted. We all have a preference to turn to one side, car keys always end up in the same pocket, we roll out of bed in the same way. Imagine if we turned this around and tuned into these nuances and gave our body options. What if instead of turning left one day we turned right? What might we see? What might change? Would our awareness effect our journey, effect our thoughts, effect our lives?

As children burst into the world and take that first breath, their curious exploration of their surroundings begin. Taste, smell, touch, everything is new and needs to be investigated. Limbs reach out with intention. Toys are targets for movement, dog’s tails are objects that provoke reactions when pulled. There is a reason to ‘curiously observe’ (as my friend Chris likes to say).

As limbs strengthen so does locomotion, a bottom shuffle, then a crawl, until a momentary balance on two feet ends in collapse. The learning process is firing on all cylinders. With every tumble there is growth and recalibration. The cerebellum recomputes the child dusts off and then tries again. Stop getting it wrong and we stop developing and moving forward. Our comfort zone actually becomes our discomfort zone. This is why I was so proud of very single persona at the Life Centre on Saturday. The only ones who knew what to expect were myself and Ulric. The only body that had a movement map for that dance choreography was me and I was inviting all 25 people to take a leap of faith and join me on my map. Everyone was united in learning to crawl again and to explore the space outside of their comfort zone, the place where all the cool stuff starts to happen and where the sign posts start to point down a multitude of different roads. Welcome to the world of what is possible instead of what is not. We look forward to seeing you there again soon.